This child is suffering from a type of extrapulmonary tuberculosis – Pott disease.

The most common forms of extrapulmonary tuberculosis (TB) in children are lymph node and CNS involvement.  Other sites include pleural and pericardial spaces, abdomen, joints, skin, kidneys, and orbits.

There are two main  presentations of TB in children: neonates and older children/adolescents.  Neonatal
TB is often due to the mother’s aerosolized secretions: neonatal TB is almost diagnostic for maternal TB.
Neonates in particular are vulnerable to developing disseminated TB; they have increased rates of military TB and CNS involvement.

Older children and adolescents tend to present much like adults, with a caveat: clinical manifestations are
often more immediate (within 1-6 months of infection).

For these reasons, the diagnosis of tuberculosis in an infant, child, or adolescent is a public health sentinel event as it often represents recent infection.  Juxtapose this to the adult population, who may have signs and symptoms years after primary infection, and the infectious disease “investigatory trail” can be muddled or lost.  The majority of children with TB in the US were born in the US (70%) and exposed at home or during a visit to an endemic region.

Even in some Westernized countries where the overall prevalence is low, the incidence of TB can vary, due to immigration patterns and modern global interconnectivity. 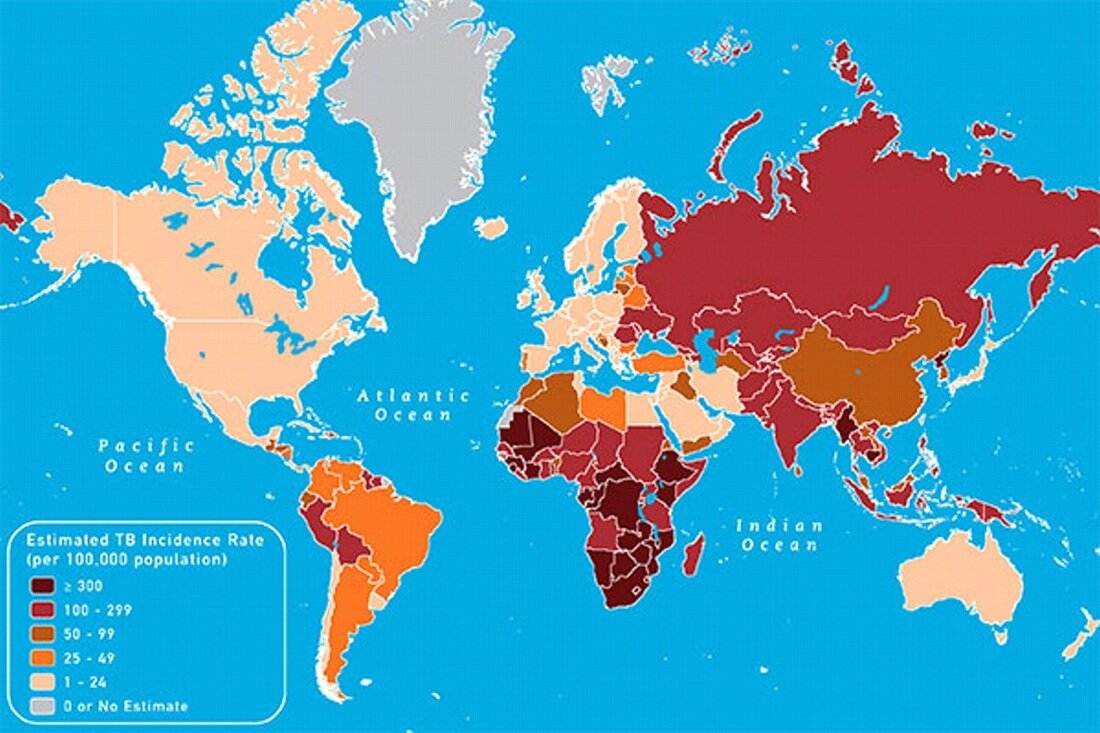 A few definitions before we go further:

Positive tuberculin skin test (TST) result: indicates possible infection with M. tuberculosis complex (positive in
individuals with active and latent TB and non-tuberculous mycobacteria).  (NB: Reactivity appears in 2 to 10
weeks; median interval is 3 to 4 weeks after exposure.)  In children, this is helpful only when it is positive – only 40% of children with culture-proven TB have a positive TST initially – a higher suspicion requires more workup.

Exposed person: recent contact with another person with suspected or confirmed contagious pulmonary tuberculosis disease and who has a negative TST or IGRA result, normal physical examination findings, and CXR findings that are not compatible with tuberculosis.  Some exposed people become infected (and subsequently, most will have a positive TST or IGRA result) and some people do not become infected after exposure (indistinguishable initially).

Latent tuberculosis infection (LTBI): M. tuberculosis complex infection in a person who has a positive TST or IGRA result, no physical findings of disease, and CXR findings that are normal or reveal evidence of healed infection (e.g., calcification in the lung, hilar lymph nodes, or both).

There are several diagnostic and therapeutic challenges to making the diagnosis of TB in children:

Signs and symptoms are not specific

Increased risk of dissemination of disease once infected


Children can present initially with vague symptoms: fevers, chills, and a cough “that never go away”, mimicking serial URIs.  Any weight loss, poor weight gain, possibility of growth delay should prompt the clinician to delve further in the history and physical examination.  The following questions have been validated in the screening of children in the US for latent TB:

Has a family member or contact had tuberculosis disease?

Has a family member had a positive tuberculin skin test result?

Was your child born in a high-risk country (countries other than the United States, Canada, Australia, New
Zealand, or Western and North European countries)?

Has your child traveled (had contact with resident populations) to a high-risk country for more than 1 week?


One of the more reliable tests in children (and in distinction from adults) is the early-morning gastric aspirate.
The child is admitted and specimens are obtained via preplaced nasogastric tube when the child wakes, before eating.  Aspirates are collected on three consecutive days, much like induced sputum cultures in adults.

Back to our boy:

Pott disease results from the hematogenous spread of bacilli during the primary infection, and the nidus slowly grows over time.  It most commonly affects the lower thoracic and upper lumbar spine and may be noticed first by what is described as an alderman’s gait (from Old English, ealdormen; compare: German Ältermann,
Danish Olderman – “elder”, “senior authority”): imagine a child walking with his belly out, shoulders back, and waddling from side to side as he walks, attempting to hypercorrect/relieve axial load pressure on the spine – a seemingly imperious or “overlording” posture.

More advanced disease can result in the Gibbus deformity, an extreme kyphosis caused by the collapse of vertebral bodies where a TB abscess has formed.

Antimicrobial therapy in the mainstay of treatment; in some cases, surgery is an adjunct for those with neurologic signs or symptoms or kyphosis > 40 degrees.  Our boy will need further workup to evaluate the extent of dissemination of his disease.

The child with possible TB is the (infectious) canary in the proverbial coal mine (the ED).  Careful attention to
the possibility of TB is important, as is recruiting your local public health department and infectious disease consultants, as the diagnosis and management in children is nuanced, multi-factorial, and time-sensitive.